Sunday was a very interesting day, as for various reasons I ended up at the show doing the game on my own! Luckily there were several people who joined in during the day so I was able to give the rules a bit of a playtest, and make some amendments. Everyone who played the game said how much they enjoyed the rules and that they gave a really fun game whilst being reasonably realistic. At one point we changed history too, as Keith Park (flying a Bristol F2b) shot down Herman Goering (flying an Albatros DVa) in flames! This lead to a bit of debate over who might have become head of the Luftwaffe in WW2.....

Legion isn't a big show, there were about a dozen or so games and a few traders (but very good ones!) I did manage to pick up a copy of "The tanks at Flers" for under a tenner, which was a bargain! The lighting isn't great in the leisure centre, so the photos below are a bit on the dark side, especially as I had to resort to a brown cloth to cover the table (no prizes for best scenery this time then!).

I was using our new style aircraft bases, made from magnetic pointers - they worked a treat! 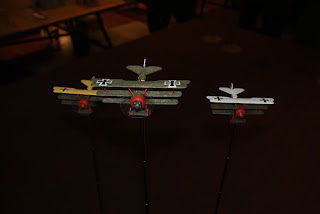 Triplanes head in to the attack 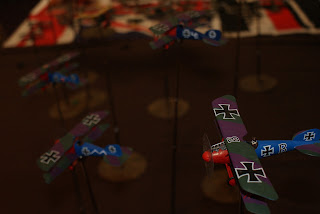 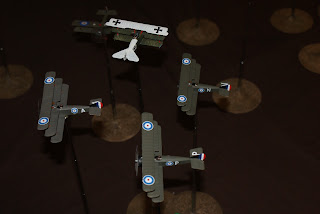 A Triplane vs Triplane dogfight develops - and a Sopwith Pup gets involved too!
﻿
﻿
Posted by Crush The Kaiser at 10:23 3 comments:

This Sunday (28th Oct) we're going to a small show at the old Pfizer's leisure centre in Sandwich, Kent. Legion is a show now in it's 5th year and is unusual as all the money taken is donated to the Royal British Legion, which is always worth supporting. There are usually a smattering of interesting traders and some even more interesting games!

As we've said previously, SELWG was Race to the Sea's last UK outing, so we won't be taking that to Legion - in any case the 6 x 6 table that we have at Legion wouldn't be anywhere near big enough! Instead we thought that this might be a good occasion to try out our new WW1 air rules, provisionally called "Dogfighting!". They are not finished yet of course, and are still a work in progress, but for those of you who do come to the show we'll be running a small participation game to play test the rules (as far as they have been written!) so please do join in.

I will try to post some pictures of the game after the show. It won't of course be a visual feast like Race to the Sea as this is just a "playtest" but we need to know if our systems work!
Posted by Crush The Kaiser at 01:01 2 comments:

As promised I'm attaching some photos of the Race to the Sea game from SELWG. I'm sure you are all thoroughly bored of pictures of this game by now but hopefully I've managed to take a few from angles that I haven't previously shown!

SELWG was the game's last UK outing, and there will be just one more show for it which will be Crisis at Antwerp in November after which it will go into a dignified retirement in CTK HQ. Some of the figures will re-appear though in our 2013 game, which is likely to be based on part of the Battle of the Marne in 1914. We will of course post pictures of construction as it happens.

But for now, here's some more of Race to the Sea... 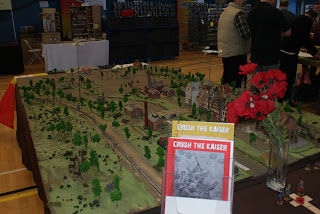 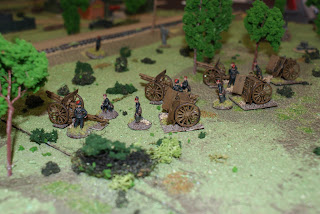 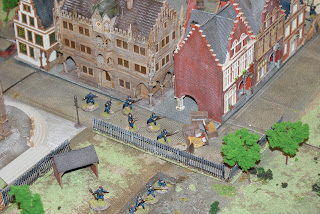 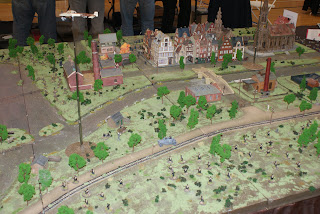 We had a really good show at Crystal Palace in South East London today and had the chance to chat to lots of people! If you were one of those it was really good to see you. I've taken some more photos of the Race to the Sea game which I will post shortly - hopefully they are ones that I haven't taken before!

We also met quite a few people today who said they would look at this blog so if you are one of those, welcome!

I'm off now to unload the car!!
Posted by Crush The Kaiser at 12:36 No comments:

Our next show will be SELWG (South East London Wargames Group) - always known as Selweg - this Sunday at Crystal Palace. We will have Race to the Sea again, which will probably be it's last outing in the UK although we will be taking it to Crisis at Antwerp at the start of November.

We had hoped to have Over by Christmas ready for publication for the SELWG show but unfortunately delays in getting the photos completed for the rules have meant this can't now happen. But with luck it will be ready for Crisis! If you are at SELWG do please stop by and say hello - we will have the final draft of the text for Over by Christmas with us so you can get an early peek at it!

We are of course also planning our show game for next year. It was to have been a Middle East game but we've been drawn (like moths to a light!) to the idea of another early war Western Front game - so watch this space for announcements and photos of construction!
Posted by Crush The Kaiser at 09:38 1 comment: