Portuguese in the Trenches

As well as working on the fortified farm, I've been doing some work on the first pieces of the new linked trench system from Early War Minatures. This looks to be an exciting range, with trenches with dugouts available now and the promise of both British and German trenches to come. The trenches, which are vacform, link up very well using an innovative magnet system, although I haven't used this as I have based mine on 2mm MDF because I usually artex my vacform pieces.

I have added extra sandbags from air-dried clay, and will do some trench bridges to cover the slight gaps where the trenches join.

Occupying the trenches in the pictures are the first figures completed from my 1917/18 Portuguese army for the Western Front, using HaT British (ok, Canadian!) infantry and Portuguese figures from the range by Lancer Minatures, which are very good too and well worth checking out. 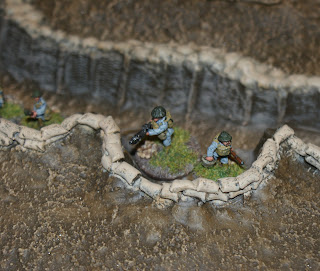 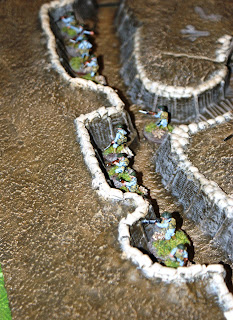 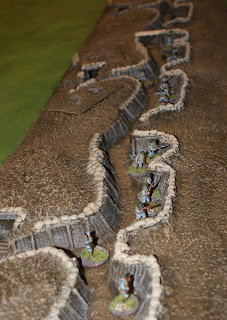 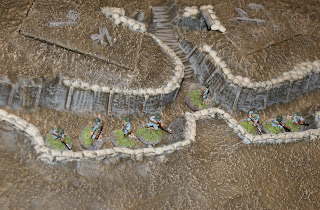 News from the Front!

Sorry not to have posted for a while! Hope you all had a good Christmas and New Year. Here at CTK HQ I've been working on some scenery for our weekly games. At a show last year I came across the old Bellona vacform The Menin Road - those of you who are of a certain age will fondly remember the Bellona series! Anyway, I picked it up for a £1 as in true wargamer fashion I thought "I can do something with that". And now I have, as I've turned it into a fortified farm of the kind often seen on the Western Front, especially in Flanders, in 1917. It should make a good objective in a game, with one side trying to capture it and the other to hold it. Having first based it on 2mm MDF and covered the vacform in artex to give it some texture I took out the middle of the cellar and replaced it with a pillbox from Ironclad Minatures, which handily takes an MMG and crew. I added some sandbags using air-dried clay, and that was it. I also made some knife-rest barbed wire entanglements out of plastic strip and rod, which were a bit fiddly to do! Here's a couple of pictures. Firstly, to show there is an MMG in the bunker: 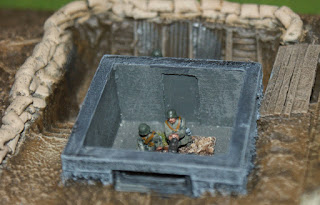 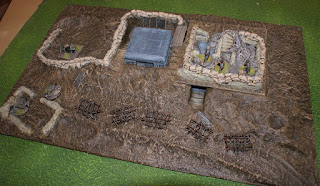 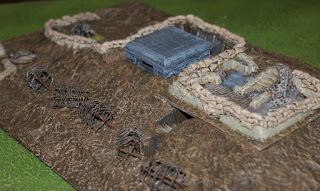 And here's one of the knife-rests: 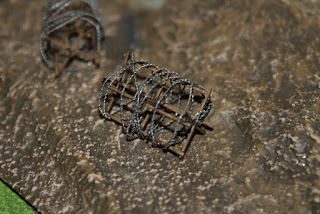 I have also been working on several of the new linked trench system bases from Paul at Early War Miniatures, and hope to post some pictures of these soon too. And of course we've been busy on getting Over by Christmas ready for publication, which has taken a little longer than we had hoped, but we are nearly there!
Posted by Crush The Kaiser at 06:14 2 comments: