The rest of the day was spent at the Australian National Memorial and the museum in the Victoria School at Villers Bretonneux. The memorial has the names of all the Australian missing in France - those missing in Belgium are on the Menin Gate. We ended the day by driving through the area where the first tank v tank battle took place between Villers Bretonneux and Cachy. 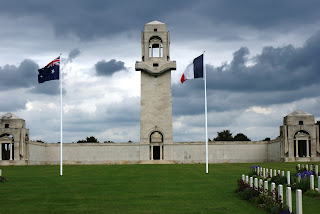 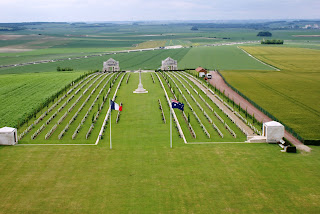 And here's a picture of the fields in which armoured warfare began!

After Crucifix Corner we moved on to the memorial to the Australian Corps at Le Hamel. This is sited on ground formerly occupied by the Germans in a position called the Wolfsberg, and was the final objective for the 4 July 1918 Australian assault. It also gives a great view of the Somme valley, and is one of the positions from which the attack on 8 August - the "Black day of the German Army" was launched.

Here's a few photos, firstly Le Hamel and the direction of the Australian attack from Corbie (the church with the twin towers, to the right of Le Hamel church, is in Corbie). 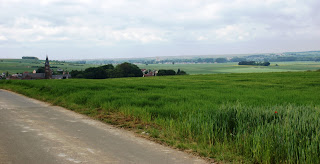 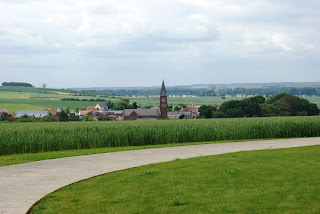 Here's a picture of the Somme valley, along which von Richthofen flew on his final flight. The crash site of his plane is near the brickworks chimney on the skyline in the photo. 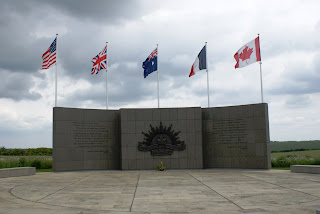 And the remains of trenches near the memorial; the 8th August 1918 attack started from here. 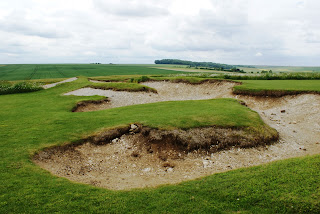 We went for a day trip (with the Western Front Association) this week to the Villers Bretonneux and Hamel area of France near Amiens. We had an excellent guide for the day who took us to some really interesting areas and explained what was going on in 1918.

We went first to the area south of Villers Bretonneux near the Crucifix Corner cemetery. It was here on 30th March 1918 that the 33rd Australian battalion (commanded by Lt Col Morshead, of Tobruk fame in WW2) and the 12th Lancers were thrown in to plug a gap that had appeared in the line. This action may well form one of the scenarios we are working on for Where the Poppies Grow as it has all the potential for a great game! The wood later became known as Lancer Wood. Here are some pictures of the ground over which the 33rd and 34th Bttns and the Lancers attacked. You can see how flat and open it is! 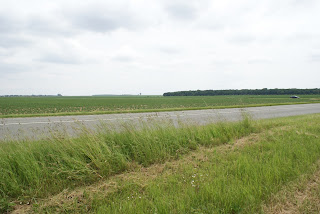 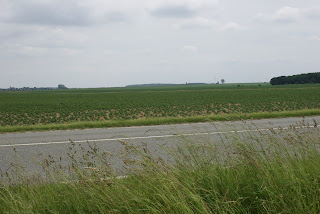 Later parts of this post will cover the Australian Corps and National Memorials, and the museum in Villers Bretonneux!

Posted by Crush The Kaiser at 06:58 No comments:

We had a really good day on Sunday - if you came along to the show and said hello to us it was great to see you!

Broadside is certainly growing as a show, there was more space to move around than other shows of similar size and having the games and traders in two halls helped too. It was a very busy day, although we did manage to get a few turns of the game in too!

As well as gaming and chatting to other gamers shows are of course for buying, and I picked up some of the excellent Early War Minatures trenches. If you haven't seen these yet they are well worth checking out - you'll see more of them on the blog when they're done!

In the meantime, here's some more pictures of "Miracle of the Marne" 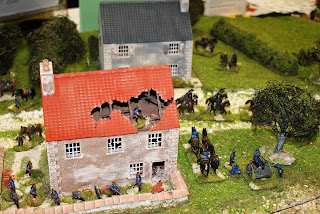 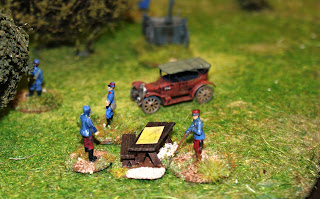 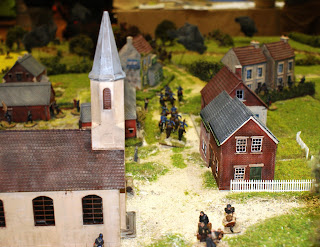 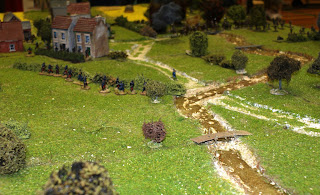 We are off this Sunday to the Broadside show, which is in the Swallows leisure centre in Sittingbourne Kent. This is a growing show that is getting bigger and better each year, and we are really looking forward to this year's show. If you are anywhere in the South East UK it is well worth a visit - last count they had nearly 40 traders and 19 games including ours of course! If you do come along, do stop by our game (which will be the Miracle of the Marne game of course) and say hi!

As ever I will post a report and photos after the show.
Posted by Crush The Kaiser at 00:29 2 comments: