We are just about to go to the War and Peace show at its brand new venue of Folkestone Racecourse. We have been down there already to set up the camping gear and it's a huge site, one and a half times the size of the Hop Farm.

It should be a really good show - the actual show runs from this Wednesday to Sunday. If you are coming to the show do drop into the Model Marquee (when it's built - it isn't up yet!) and say hello!

As usual I will post photos and a show report next week when we get back.
Posted by Crush The Kaiser at 09:31 1 comment:

Here are some photos of WW1 tanks at Bovington. Unfortunately I missed taking pictures of the reproduction A7V that they have at the museum as it had been out at Tankfest the week before and was still in the sheds for cleaning. However, here are a few of their exhibits!


First off, the one that started it all, "Little Willie" 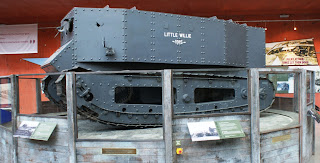 Another "reproduction", the Mark IV used in War Horse: 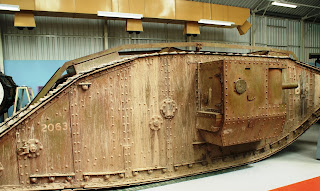 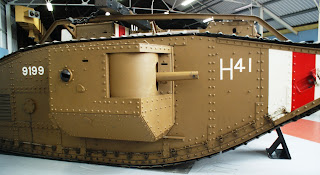 And the Mark IV: 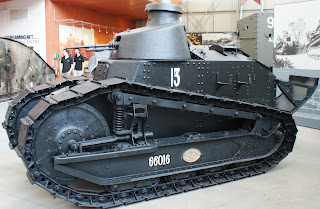 And lastly a Whippet: 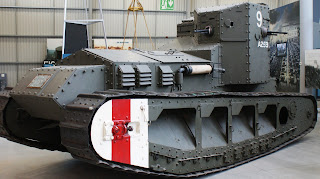 Pictures from Bovington - watched over by "Royalty"!

We are back now from the Tank Museum at Bovington in Dorset, and what a great weekend it was! The show was excellent, one of the best atmospheres for a show and in a unique venue as all the traders and games are set amongst the tanks in the museum. Our game was positioned just in front of a massive Tiger II or "King Tiger" - hence the royalty! It was good to see everyone who stopped by at our game to say hello (hi Matt!) and to chat about the games.

The other advantage of being in a tank museum was of course the chance to look at the tanks "up close and personal". The First World War Hall has got quite a few tanks including a Mark IV and a Mark V, as well as a Mark II and a Mark V**. Highlight of the weekend for me was the chance to climb inside the Mark IV and sit in the drivers seat. It was interesting to see how small it was inside, and to realise how little they could see of what was going on outside the tank. I took loads of photos of course, and will post a few of them here. 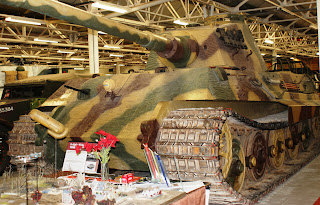 In our game we were using the excellent new vacform trench system by Early War Miniatures: 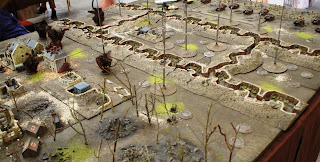 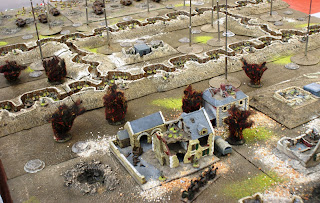 ﻿
In the next post I'll include a few pictures of the exhibits in the museum!
Posted by Crush The Kaiser at 12:35 No comments:

I'm off on Friday to the Battlegroup South wargames show at Bovington Tank Museum in Dorset. It's my first time at the show, which is held over the weekend and should be really good as the games and trade stalls are all around the tanks in the museum!

We are not taking our Miracle of the Marne game to this show, as one half of CTK is also one of the organisers of the show and so I'd be left on my own for the weekend! Instead I am working alongside Early War Miniatures with a game using their excellent vacform trenches and our figures, tanks and planes. Should be fun - expect a report and pictures as usual next week!
Posted by Crush The Kaiser at 09:08 No comments: